A Gwich’in runner from Vancouver has brought his cross-country campaign to raise awareness about missing and murdered Indigenous women and girls to Atlantic Canada.

Brad Firth, also known as Caribou Legs, has been running across Canada since May and trying to visit as many First Nation communities along the way.

“I try my best to educate people on (missing and murdered Indigenous women and girls), Firth said during an interview on Tuesday. He was at the L’nu Sipuk Kina’muokuom (LSK School) in Indian Brook First Nation, N.S. where he spoke with high school students.

Firth was inspired to raise awareness on the topic in 2015 while he was running from Vancouver to Ottawa for another cause. While he was in northern Ontario, he received a phone call in which he learned his sister died from a heart attack.

“I found out later that her and her husband were fighting a lot. When they did the autopsy, there were lots of bruises on her body, on her torso,” Firth explained. “That induced a heart attack,” he added.

When Firth speaks to Indigenous youth, his message is mostly aimed at the young men in the audience.

“Men need to support our women. Men need to stand down and, you know, be more supportive men and healthier men and less violent men,” Firth explained.

Firth has experienced racism during his cross-country run 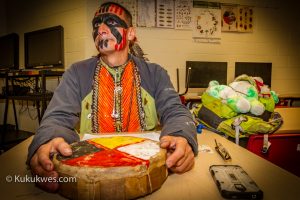 Firth starts his daily run with a prayer before he puts on a traditional breast plate, ties a feather in his hair and puts on black and red war paint. He holds a small drum in his hand while he runs. He says some of the reaction he has received by people while running along the highway hasn’t always been positive.

“I’ve been spit at. I’ve had pop bottles thrown at me outside of vehicles. People driving by on the highway saying racist things to me,” Firth explained.

Since arriving in New Brunswick at the beginning of October, Firth, 46, has received numerous invitations to speak to students at schools and universities. People have also been inviting Firth to stay at their homes when he is not running.

“I got to meet a lot of traditional people,” Firth said about his time in New Brunswick. “I was really excited to meet them because I’m a sundancer myself so I’m always happy to meet like-minded warriors out there who are practicing ceremony, praying for others,” he said.

“So far, coming into Nova Scotia, Mi’kmaw territory, it’s the same,” he said.

Since Firth is unsupported for this year’s run, it means he doesn’t have a vehicle or funding to pay for lodging every night.

Firth has a full schedule while he is in Nova Scotia until November 4. Firth plans to spend the rest of October travelling throughout Nova Scotia. He has been invited to speak with students in communities such as Wolfville, Yarmouth, Bridgewater and Eskasoni.

He then travels to Newfoundland and Labrador by ferry the first week of November where he will meet with runners coming from Vancouver. They will run from Port aux Basques to St. John’s where his run for missing and murdered Indigenous women and girls will end.

“We’re already working on next summer’s run and that run is going to be (about) the kids who were killed in residential school care,” Firth said.

December 16, 2016 Rob Csernyik
Agnes Gould, known as Aggie Baby, has been looking for her sister for over 23 years, but her search knows no borders. Though Virginia Sue Pictou-Noyes went missing from a Maine hospital, she was still […]

Henneberry to give final arguments to have murder conviction overturned

April 13, 2017 Samantha Calio
One of two people serving life sentences for killing an Inuk woman from Labrador over rent money in 2014 will present her final arguments to the Nova Scotia Court of Appeal in Halifax Thursday on […]