Hugh Akagi thought about the future of the Wabanaki Confederacy while the partial eclipse was happening Monday afternoon.

The chief of the Passamaquoddy people in Canada had travelled from his home in St. Andrews, N.B. to Kejimkujik National Park near Maitland Bridge, N.S., to take part in the Wabanaki Confederacy’s four-day annual summer gathering.

Akagi and 40 other Indigenous people gathered at the national park Monday afternoon to take part in a traditional ceremony to light the sacred fire to start the confederacy’s event. They all watched as several people spent nearly an hour trying to light the fire with a single flint during the partial eclipse. 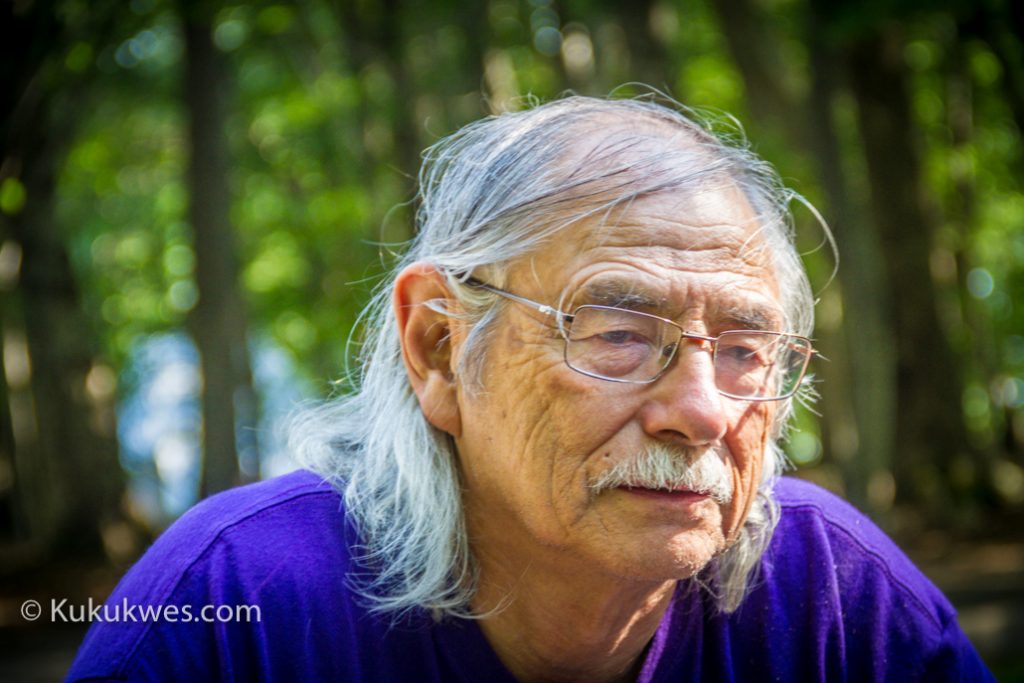 “I’m thinking the fire needs to come to life, the confederacy needs to come back to life,” Akagi explained following the ceremony.

“The confederacy has gone through some pretty dark years, pretty rough times as every individual tribe, every Native person has,” he said.

“How do we rekindle that fire, how to bring it to life? How do we bring back the songs?” he asked.

The Wabanaki Confederacy is a traditional political alliance between the Mi’kmaq, Wolastoqiyik (Maliseet), Passamaquoddy, Penobscot and Abenaki peoples in northeastern North America that dates back to the 1600s.

The name, Wabanaki, means “People of First Light.” The confederacy’s traditional territories extend from Newfoundland and Labrador to New Hampshire and Massachusetts.

The British ordered the confederacy to be disbanded in the mid-19th century. However, the alliance was revived in 1993.

Kejimkujik National Park, where the Mi’kmaw petroglyphs are located, was chosen for this year’s confederacy meeting because the place once was a traditional gathering place for Mi’kmaw people.

The agenda for the gathering included renewing alliances and discuss pressing issues such as the protection of water sources, the environment, language, identity and youth.

“It lit your own fire within your soul” – Nadine Bernard

Nadine Bernard, a Mi’kmaw from Sydney, N.S. said she noticed some symbolism as she watched the group trying to get the sacred fire going.

“It was kind of emotional, seeing the struggle of it from beginning to end, seeing the many hands, people trying their hardest (using) the flint,” Bernard, a Coady Institute student in the Indigenous women’s leadership program at St. FX, described.

“So just watching the different people struggle to get there, you could see it inwards, saying the struggle of our people to identify with our culture, be proud of who we are, to save our language, to go back and be leaders in our communities,” she said.

“And once the fire finally went, it was empowering because it kind of gave you that hope again, like it lit your own fire within your soul,” she added.

Bernard said she hopes to sit down to talk with elders during her stay.

“We need the knowledge of our elders to give us because a lot of us are younger and we really don’t have that experience and that knowledge that we’re seeking,” Bernard said.

Akagi hoped that participants will think about the ways they can contribute to make the Wabanaki Confederacy a stronger alliance.

April 27, 2016 Maureen Googoo
A new study released Wednesday shows the Indigenous economy in Atlantic Canada contributes approximately the same amount of money as other major projects in the region such as the Irving Shipbuilding. According to the study […]

May 3, 2017 Samantha Calio
An anthropologist at Saint Mary’s University is conducting research on the rate and severity of dental malocclusions among Mi’kmaw people in Atlantic Canada. Tanya Peckmann, a professor in the Anthropology Department at SMU in Halifax, […]

September 24, 2015 Maureen Googoo
The executive director of the Atlantic Policy Congress of First Nation Chiefs is urging all chiefs and councillors in Atlantic Canada to encourage their band members to vote in the upcoming federal election to make […]